Athlete’s foot, one of the skin infections caused by fungus, is most often caused by dermatophytes. It is estimated that every second person can be susceptible to athlete’s foot, which may potentially result from the fact that the condition is fairly common and easily transmitted.

Nail fungal infections are caused mainly by dermatophytes. They occur most frequently in  adults and the risk increases with age.

Every  second person is a Candida carrier which, at reduced immunity, becomes a dangerous parasite and causes infections in the host. The elimination and prevention of fungal infection belongs to very difficult undertakings. When fungal infection is suspected, a sample is taken from the nail plate or skin surface. It is vital to bear in mind that 12 hours before sample taking the nail or skin area should not be washed or rubbed with any medication or cosmetics. Only then will the analysis result be most reliable.  When the skin culture determines the kind of fungus, an appropriate treatment can be implemented, infection eradicated and immune system stimulated. Athlete’s foot and nail fungal infections in particular cannot be treated only with pharmacological means.

Home methods of treatment may not only prove ineffective but also harmful. After a short remission, the condition may relapse, even  with greater severity. Professional treatment should be initiated at specialist clinics preferably as soon as the first symptoms are noticed.

A specialist can suggest oral or local medication or a combination of the two when necessary. The treatment option is selected according to the infection severity, type and location. The applied agents like medicines, ointments, spray or cream, all contain antifungals which remove the cause of the disease. Since the treatment can take a long time, it is important to be systematic and consistent.

All the medications and ointments should be applied as recommended even after all the symptoms have disappeared, which is possible after only a week since the beginning of the therapy. In the most severe cases steroids may be required, however, most frequently it is antibiotic or antifungal agent that is chosen with regard to the identified microorganisms.

Our aim is to disinfect the skin and nail plate thoroughly and apply the target treatment to:

Hygiene in the household:

The patient undergoing anti-fungal treatment should strictly follow the specialist’s instructions, take medications and apply the prescribed agents systematically, use exclusively their own toiletries (towels, sponges and brushes) but also refrain from the contacts which can put others at risk of infection.

Patient 1. – Male patient after mechanical toe injury – a fire extinguisher fell on his big toe and damaged the nail matrix.

Initially the nail came out completely due to the injury and then slowly grew back developing a fungal infection. The nail was painlessly cut out and the changes that had developed under the nail were cleaned. The cured nail, which was protected with disinfectants and antifungal agents by the patients himself at home, was fitted with nanocrystalline silver dressing.

The nail was reconstructed and kept until a new and healthy nail grew back.

photo. 1.Before treatment, photo. 2.During treatment process, photo. 3. After treatment

Patient 2. – A female patient with cardiorespiratory failure, dialysed and suffering from type 2 diabetes for over 30 years.

The patient came to the clinic with extensive skin changes on her feet: horny skin, calluses, callosity and very long toenails which had not been cut for 3 years. Ingrowing nails  eventually prompted her to seek professional help. The photos show the difference after one-off treatment. Since the patient was too tired after sitting in the seat for a long time, the procedures had to be interrupted at the stage that is presented in the pictures. The feet processing was complemented with the application of antifungal agents for the skin and the nail plates. Tamponades were also applied to prevent ingrown nail relapses and pressure release between toes was used as a temporary measure. To produce the satisfying effect, the whole treatment was divided into several stages, with the final one being the selection of the appropriate specialist shoes and toe orthoses. 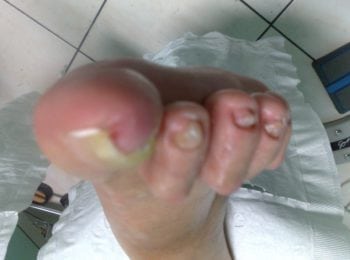 Patient 3. – A female patient with long-term fungal skin changes on the soles of her feet

Apart from fungal infection, two calluses were found around callosity changes on the big toe and mid-foot. For the patient, however, it was not the callosity that caused most trouble but her “sore skin” which caused pain and occasionally bleeding from biggest skin fissures.

Disinfecting and keratinising agents were used for the local treatment of the infected area. Healthy epidermis was restored with carefully selected skin care products. The skin repair took 3 months.

Patient 4. – A patient came to the clinic after several years of dermatologic antifungal treatment, mainly with oral medication.

As the patient’s health status excluded oral treatment, a complete antifungal procedure was applied locally. The whole treatment was divided into the following stages: nail processing, antifungal procedures, recommended products application and  the right diet. The patient followed all the recommendations systematically at home.

photo. 1. During treatment, photo. 2. After treatment

Obvious difference after 6 months when the nail is growing back healthy and flexible. The patient will use only the foot care and disinfecting products which will let the infected nails grow out. The desired condition can be maintained more easily when the patient sticks to the recommendations.

Patient 5. – For years, a female patient had been treated by dermatologists primarily with oral drugs and local steroid ointments.

The suggested  treatment included diagnostic and laboratory tests to determine the fungi responsible for the infection. We recommended disinfectant agents and therapeutic means to be used at home which involved a proper diet, antifungal and oiling agents.

After adopting our recommendations, the patient continued the foot care at our clinic and had the feet processed with the mill. The photo shows the effect achieved after a 6-month treatment at home.

Patient 8. – After a nail injury several years earlier the patient had a problem with an ingrown nail which was surgically removed.

The detached nail was infected with dermatophytes-mold. We cut the nail out completely, processed it and treated locally. To achieve a cosmetically pleasing look, the patient had to follow our recommendations for several months.

Athlete’s foot is one of the most frequent conditions diagnosed at the dermatologist’s. Since there are about 250,000 genera of fungi, the skin sample collected from each patient should be carefully analysed.

Most fungi types are not harmful and do not require treatment. Yeast that naturally occur in our bacterial flora of the skin or mucus membrane play a role of a protective barrier against pathogenic bacteria. They live in symbiosis with the host and their removal is impossible. There are, however, pathogenic fungi  which has recently been spreading, thus increasing the systemic fungal infection incidence.

Mould – occurs in mucus membrane, most often in oral cavity or large intestine. To determine fungus type, the material is collected with a swab. In the case of oral cavity infection or long-term wounds, skin scraping is required and if the large intestine is infected the faecal matter should be collected for analysis.

Yeast – occurs on both external and internal body parts and organs and the fungus type is identified as in the cases above.

When oral pharmacological treatment was not implemented, proved ineffective or drug resistant, acute and severe fungal infections can become a life-threatening condition. Such a risk refers mainly to patients at Infectious Diseases Wards or intensive care units, patients suffering from cancer or AIDS but also those after organ transplant when their immune system is weakened.

Precise and swift diagnostics is of great importance in successful treatment and, along with prompt action, can save life if lethal fungus type has been identified.