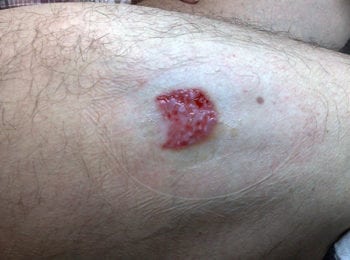 Burns are the most serious types of wounds which affect all sufferer’s life aspects, ranging from physical to mental ones. The most common causes of burns include the contact with fire and hot fluids. Electrical and chemical burns occur less frequently. Burns involve deep damage to the skin as well as to muscles and tendons which are then the cause of potential muscle contracture. The dead tissue must be removed and replaced with transplanted tissue (skin graft) which, in turn, leaves another wound in the donor section. The next stage of treatment may require plastic surgery and reconstruction when the skin damage or deformation occurs on the exposed body areas such as the face, neckline or upper limbs. It is therefore extremely important that an interdisciplinary team should take care of post-burn wounds from the beginning of the wound formation.

Post-burn wounds are connected with physical suffering, long treatment, recuperation and rehabilitation which may last for years.

Financial cost which is dependent on the wound healing process is also a significant aspect of the wound management. The healing duration and the quality of the scar rely heavily on the qualifications of medical staff and the available professional equipment. The patient, in turn, incurs the costs of conservative treatment of post-burn wounds and often private health care due to the frequency of therapy.

Psychotherapy is a vital element of post-burn wound management. It is crucial in the case of extensive skin damage when the patient’s appearance is dramatically changed. The acceptance of a new look and often impaired functioning can influence the patient’s mental condition and life quality. In extreme cases the mental struggle can lead to a suicide.

While a burn is defined as a local damage to the skin layers and mucus membrane which results from the contact with thermal, chemical or electrical factor or ionizing rays, frost-bites are defined similarly but as a result of prolonged impact of cold, ice, snow or chemical substance (ethyl chloride or liquid nitrogen).

In both burns and frost-bites, the key factors affecting the sufferer’s health and life include:

First-degree burn affects only epidermis and the burn site is red and painful. It lasts for 5-10 days and heals naturally after the outer layer of the skin peels off.

Second-degree burns can be divided into superficial (a)  and deep (b) burns.

(a) Second-degree superficial burns involve the epidermis and the outer dermis layer of the skin. The burn site appears red, swollen with characteristic blisters filled with yellow serous fluid. If the wound is not infected the healing takes about 14 days and leaves minor scars.

(b) Second-degree deep burns involve damage to the dermis to a various depth. There are no blisters and the skin colour, from white through pink to red, depends on the skin exposure to the damaging thermal factor. The wound is painful and its healing process may take  21-35 days and leaves a scar. If an infection develops in the wound it may deteriorate to the third-degree burn.

Third-degree burn is referred to as a full thickness burn as it destroys the outer layer of the skin and the entire layer beneath i.e. the dermis but often also the vessels, nerves, subcutaneous layer and adipose tissue. The skin colour turns to brown and black and it can be covered with grey eschars. The burn area is painful when pressed although its surface is insensitive to touch as the pain receptors were destroyed there.

Fourth-degree burns involve necrosis of the subcutaneous tissue as well as the tissue beneath: muscles, tendons, bones and joints.

Burns which occur as a result of an accident as well as the accident itself cause the patient to sustain multifaceted damage. In the case of a fire the patients often suffer broken bones, puncture wounds, mutilation and bruises. Physical damage is accompanied by mental suffering and trauma, often connected with the loss of the dearest and property, which can all potentially delay healing and recovery.

Electrical burns, scalding from acids and boiling liquids cause pain which requires anaesthesia and prompt surgical intervention. Remnants of clothing, tar or splinters of plastic stuck to the skin must be removed as soon as possible and skin graft should follow immediately after.

Serious systemic post-burn response is referred to as the burn disease. Loss of fluids, disturbance to  water balance, metabolism and immune system as well as hypovolemia can induce post-burn shock which, if left untreated, can lead to systemic inflammatory response syndrome (SIRS). The post-burn shock intensity depends on how extensive the burn was. The burn disease occurs when thermal burn size reaches 15-20% of total body surface area (TBSA) in adults and 10% of TBSA in children.

The burn disease has 3 clinical stages:

Shock (lasts 48-72 hours), the wound is the direct cause of shock. Hypovolemia is manifested by a decrease in the volume of blood plasma, reduced cardiac output, decreased volume of urine and increased vascular resistance.

Catabolic phase (lasts several days up to several weeks). The stage involves necrotic disintegration of burnt cells and energy mobilization towards wound self-cleaning. Septic and toxic complications are particularly dangerous at this stage.

Patient 1. Having cut herself, a 64-year-old patient disinfected it with 70% alcohol. It burnt the skin and blisters with serous fluid appeared.

The patient pierced the blisters and again disinfected them with alcohol. The ensuing deep, painful and swollen wound with exudate was treated for 6 months with little success. Then the patient came to our clinic, already with extremely painful and significantly swollen wound, profuse exudate and trouble walking.

Thermal burn on the right foot.

We began the treatment with smear collection for skin culture. Streptococcus agalactiae and Escherichia coli were identified. The wound was appropriately disinfected, moisturized and long-lasting dressing was used. The patient was also instructed how to modify her diet and hydrate her body. Correctly chosen footwear was also recommended.

The stage of the post-burn wound treatment.

The ultimate effect was achieved after 3 months. All that time the patient followed all the recommendations, watched her diet and took care of proper hydration. She also looked after the bunt skin area herself at home.

The final results of treatment.

Patient 2. After a car accident a 43-year-old patient had a burnt palm and underwent a post-traumatic amputation of his thumb and index finger.

A skin graft on the right palm was performed and the patient was treated for 2 months at the surgical clinic where he was recommended to “soak it in yellow soap and cover the wound with a gauze pad”. The patient came to our clinic 2 months after the skin graft.

Post-burn wound on the palm with ulceration of the transplanted skin.

The skin culture identified Streptococcus ureus. After 2 months the wound was completely healed. The patient participated in the rehabilitation of the whole upper limb.

Patient 3. A female patient (aged 53) burnt both her shins with hot starch. After initial, partial healing, ulceration occurred which turned into trophic ulcers.

Active, long-lasting alginate dressings were used to clean the wound of dead tissue. Additionally, ozon oil was applied to reduce itching. At present, the patient attends hyperbaric chamber and rehabilitation.

The wounds during treatment.

The following pictures show the wounds after a month’s treatment with a range of dressings selected according to the healing stage. 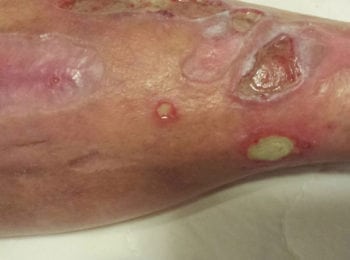 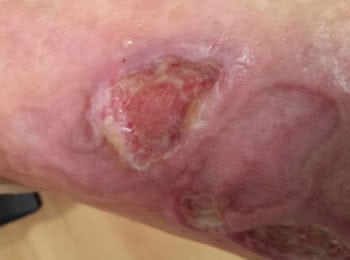 The wound after a month’s treatment.

After 6 months when new skin was partially regrown compression therapy was initiated.

The result after 4-month treatment.

Photo 1. Before treatment, Photo 2. After treatment