An ulcer is a long-lasting wound which deteriorates or does not heal as a result of prolonged process caused by lack of therapeutic effect. Ulcers are usually painful and bacteriologically colonized.

Common forms of ulcers include:

The patient came to the clinic to have his ulceration treated as lack of care led to necrotic fibrosis and partial “mummification” (dry necrosis) of the ulcer.

Necrotic ulceration on the right shin covered in fibroma and the effect after healing.

The wound cleared of necrotic tissue and fibroma. The ulceration on the right side was prepared for skin treatment. Rehabilitation and skin immunization eventually resulted in skin healing.

However, since the patient complained about the pain in the ankle joint area, another surgery was performed. The persistent medical condition resulted in the patient’s exclusion from the sports club, which caused his deep depression.

When the patient came to our clinic, he still had difficulty standing and putting pressure on the leg.

Innocent-looking eschar appeared to be dried fibroma formed on a postsurgical scar. At wound debridement the pus was collected for laboratory analysis.

With the patient’s consent, steps were taken towards wound opening. The patient was advised to observe the wound source and cause and to walk with crutches to release pressure applied on the foot. Additionally, pressure-relief pads were used for the heels.

The photo shows the fistula exposing the fibroma which also covered the wound walls. The fistula was cleansed, absorbing and moisturising multi-layer dressing was used in the wound bed, which gradually facilitated wound closure. Rehabilitation and wound immunization was also systematically implemented.

The fistula shown in the photo uncovered the fibroma concealed beneath seemingly healed wound. The wound walls were covered in necrotic fibroma.

The complete healing process took 3 months and 20 days. Now, the patient is back in his sports team as a professional player. He is happy to realize his dreams and wins Polish Cups. The only moment when he feels pain is at the weather changes.

Patient 3.  62-year-old patient with extensive venous ulceration on the lower leg reaching  the area around the shin.

The patient was a smoker for many years, now he has not smoked for 5 years. The ulceration occurred over a year ago but despite many visits to dermatologists, GPs and surgeons, he still has not tackled the painful ulcer. Moreover, severe lymphatic oedema was also observed. The patient describes the pain as unbearable as  it causes trouble sleeping and walking and disrupts normal functioning. No results of medical interventions caused a feeling of despair.

photo. 1. Venous ulcer on the shin

The wound was treated with multitargeted desinfectants, processed and dressed with specialists materials.

The healing process took 6 months. The patient functions normally, has regular lower limb  check-ups and uses the recommended products such as compression stockings.

Patient 4. A 67-year-old patient with chronic arteriovenous ulcer on the right lower limb which caused pain and depression.

For 4 years the wound have kept healing and opening again.

The wound with fibroma and chronic skin changes. The patient was both physically and mentally exhausted after many years of unsuccessful treatment. Diagnostic procedures, long-term dressings and skin and limb rehabilitation were applied. 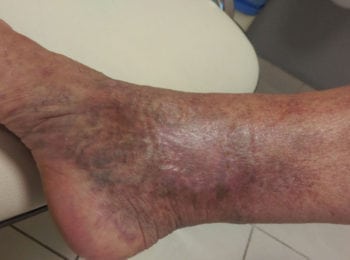 The wound was healed in a month and the patient could enjoy her life back again. She was  given proper self-care instructions and prevention recommendations.

Patient 5.  A patient with lower limbs oedema, shin ulceration, pain and lymph oozing out of the wound. She could not cope with the ulceration and swelling.

Dermatologists’ recommendations carried out for many years produced no effect.

Lymphatic oedema treatment must be continued for a lifetime. One should also bear in mind  individual recommendations. Regular exercise, lymphatic drainage and compression therapy can also have beneficial effects and help to resume normal functioning.

Patient 6. A patient suffering from long-lasting  atherosclerotic changes in lower limbs came to our clinic with necrotic ulcer around her right ankle.

The patient had applied greasy ointments and dressings unsuitable for the wound kind and stage.

photo. 1. Before treatment, photo. 2 . During treatment

Prompt treatment results were achieved thanks to the patient’s therapeutic compliance.